The Otsego Jazz Ensemble sincerely hopes and prays that all our fans are well during these strange times.

The OJE will perform a collective sigh of relief in E-flat (the jazz version, of course) when we can finally, safely, return to our Thursday night practices and 2020 gig schedule!

So far this year we’ve canceled four gigs due to Covid-19: our yearly Senior Prom Dance at WMU, a semi-annual concert at Otsego High School, our yearly appearance at the Thornapple Arts Council Jazz Festival, and finally our second year in a row Jazz Concert at First Presbyterian in Kalamazoo. A semi-annual July Plainwell Bandshell concert has been canceled, but talks are ongoing about featuring the OJE at a concert this Summer at the bandshell, possibly on July 15.

Highlights from 2019 include a great concert last year at the South Haven Jazz Festival with guest artists Edye Evans Hyde on vocal, Michael Hyde on guitar, Derek Brown on Tenor sax performing two original compositions of his, and a surprise last minute guest appearance of vocalist Wayne Powers to wrap up the gig. The OJE also had memorable concert and dance performances at the South Haven waterfront, Elk’s Club in Otsego, Arpeggio’s in Otsego, WMU Senior Dance, and the Hastings Jazz Festival.

You can find a few recordings of last year’s performances, just search for “2019”: OJE library and sound samples.

Please see our event calendar for updates, especially to track the date for a performance at the Plainwell Bandshell: https://oje.nu/events/.

Here are some charts with actual sound clips from practice that the OJE worked on at one of our last practice sessions at the Otsego Elks, February 27, 2020, before taking a coronavirus break:

Me and my Shadow

We’ll get It (recent new chart, OJE never performed it)

Stay well, everyone!  “Otsego Jazz Ensemble Return to Action after Covid-19” is almost like a call to action, to get this band rolling again.

The 18-member Otsego Jazz Ensemble (OJE) is has two public performances this week in Otsego, and you’re invited!

This Thursday May 2nd, OJE plays at Liquid Note Brewing at the Arpeggio, 119 East Allegan Street, from 7-9:30pm. Special guest: Vocalist Lana Hoffman! The bar seats about 120, and there’s even a little room for dancing.

Liquid Note Brewing at the Arpeggio opened in February.   On tap are Psychedelic Haze, Badfish, Satchmo’s Lullaby, A Hard Day’s Pale Ale and DC Rocking Wheat, all of which are named to honor a deceased musician.

This Saturday, May 4th, OJE is playing a free dance at the Otsego Elks, 113 S. Farmer.  Come and buy dinner from the Elks at 6pm, and the music and dancing starts after dinner, around 7pm.   Plenty of room for dancing, and requests are welcome!
OJE has been around 30 years, and is coming off recent great performances at the WMU Senior Prom and the Thornapple Jazz Festival.  Come out and hear classic big band, Sinatra, as well as jazz and rock.  We play classic big band, Ian Brown sings the great standards ala Frank Sinatra, and the band plays a wide variety of swing, jazz and rock.

It’s coming up soon.  All you need to do is put it on your calendar, get dressed and show up with your dancing shoes on.  It’s free!   Once again, the Otsego Jazz Ensemble will provide the music, from 7pm to 10pm.   The band will play your favorite swing numbers from the Big Band Era, like Glenn Miller and Count Basie.  Ian Brown will sing Sinatra favorites, and the band will feature special guest artist Lana Hoffman on vocals too.
The theme for 2019, “Celebrate,” will feature red, white and blue accent colors.

Going since 1988, The Senior Prom is an elegant and nostalgic evening of dancing and entertainment that bridges the generations between WMU students and Kalamazoo-area senior citizens. No reservations are necessary to attend this semi-formal event, which is free and open to the public.

For general prom information, call Residence Life at (269) 387-4735. Specific questions may be directed via email to that office’s Bryan Austin at bryan.austin@wmich.edu.

And here are the particulars:

Attention Dancers:
If you’re looking for a place to kick up your heels this week, Otsego Jazz Ensemble, (OJE), would like to invite you to our regular rehearsal this Thursday at the Elks Club, 113 S Farmer Street in Otsego.  It’s only $5.00 a person to dance from 7pm to 9:30pm.   We take a break around 8:15 or so.
Bring some friends!   It’s a good chance for the band to work up some new dance tunes and get feedback from dancers and it’s a lot of fun.  It also helps us pay our rent at the Elks Club!
Hope to see you this Thursday.  Tim Culver, Creative Director, OJE

The 17-piece jazz band, based in Otsego, has been together for more than 30 years.  The OJE, as it’s affectionately known by fans, plays music from the big band era including Glenn Miller, Duke Ellington and Count Basie as well as more modern big band jazz arrangements that cover many styles of music like rock, pop and jazz.  Being a traditional big band of five saxes, four trombones, four trumpets and a rhythm section, the band also has two vocalists who perform the music of Frank Sinatra, Ella Fitzgerald, Diane Schurr and Michael Buble’. 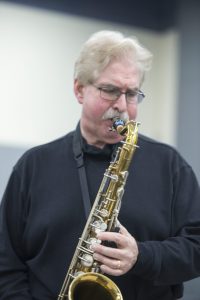 The Band led by Creative Director Tim Culver, trumpeter and saxophonist who has co-led the Kalamazoo Big Band for more than 30 years, and plays in the Gull Lake Jazz Orchestra and Lew Boyd Band.  Culver joined the OJE trumpet section about 12 years ago.  He says its a hard working group.

“Everybody in OJE takes the music seriously and we all really give it a lot of time and effort.  As audiences change, it’s a challenge for the band to change and adapt.   We play all dance styles for the ballroom dancers.   We’re also adding rock and pop arrangements.   The music of groups like Chicago, Blood Sweat and Tears, Pat Metheny and Tower of Power are all a great fit for a band like ours.  We love to put a lot of variety in our concerts.” 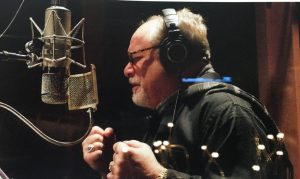 Wayne Powers-If Love Were All

Guest artist for this concert is actor, radio host, comedian and jazz vocalist Wayne Powers.  The veteran of the New York and Los Angeles scene, Powers landed in Kalamazoo three years ago.  He just released his second album, “If Love Were All”.   Powers recently got married and is in the process of moving to Chicago with his new bride.  Powers will sing “Birth of the Blues”, “A Foggy Day”, “All of Me” and “They Can’t Take That Away From Me.” 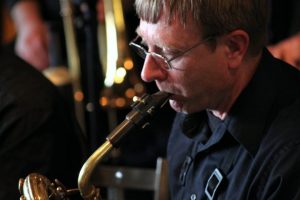 Among selections for this concert will be a beautiful Wally Menard arrangement of “When October Goes”, sung by OJE vocalist and trombone soloist Martha Reid.  Menard recently retired from OJE’s sax section, and has written many great arrangements for the band.  The song lyrics to “When October Goes” were written by Johnny Mercer.  After he died, his widow passed the lyrics to her husband’s friend, Barry Manilow, who finished the song in 1984.

The concert coincides with the October 5th Kalamazoo Art Hop.   Art Hop is an evening of exhibits and events held in downtown 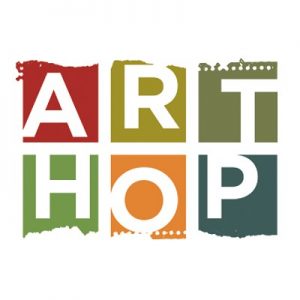 Kalamazoo and the surrounding neighborhoods. It’s a FREE event and one of the best things you can do on the First Friday of the month….every month!

The Otsego Jazz Ensemble is proud to be a performer at the Thornapple Arts Council Jazz Festival again this year.   The festival has been going strong now for 15 years in downtown Hastings, Michigan.

Guest artist Robin Connell will play piano on Mintzer’s “Acha” and will join Robbins on the Basie classic “Splanky.’

Vocalist Ian Brown will cover the Sinatra favorite “Come Fly With Me” and also Culver’s arrangement of “I Got a Gal in Kalamazoo.”

Martha Reid will sing a couple of great arrangements by Mike Crotty of the Airmen of Note:  “Lullaby of Birdland” and “Mood Indigo.”

And….there’ll be some surprises in store too, no doubt!

Come out to the Festival for some great music Thursday thru Saturday at venues all around downtown Hastings and come out Saturday at 2pm to hear the OJE at Thornapple Plaza. 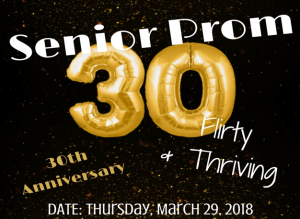 It’s coming up soon.  All you need to do is put it on your calendar, get dressed and show up with your dancing shoes on.  It’s free!   Once again, the Otsego Jazz Ensemble will provide the music, from 7pm to 10pm.   The band will play your favorite swing numbers from the Big Band Era, like Glenn Miller and Count Basie.  Ian Brown will sing Sinatra favorites, and the band will feature special guest artist Lana Hoffman on vocals too.  The theme this year is “Thirty, Flirty & Thriving!”

And here are the particulars: 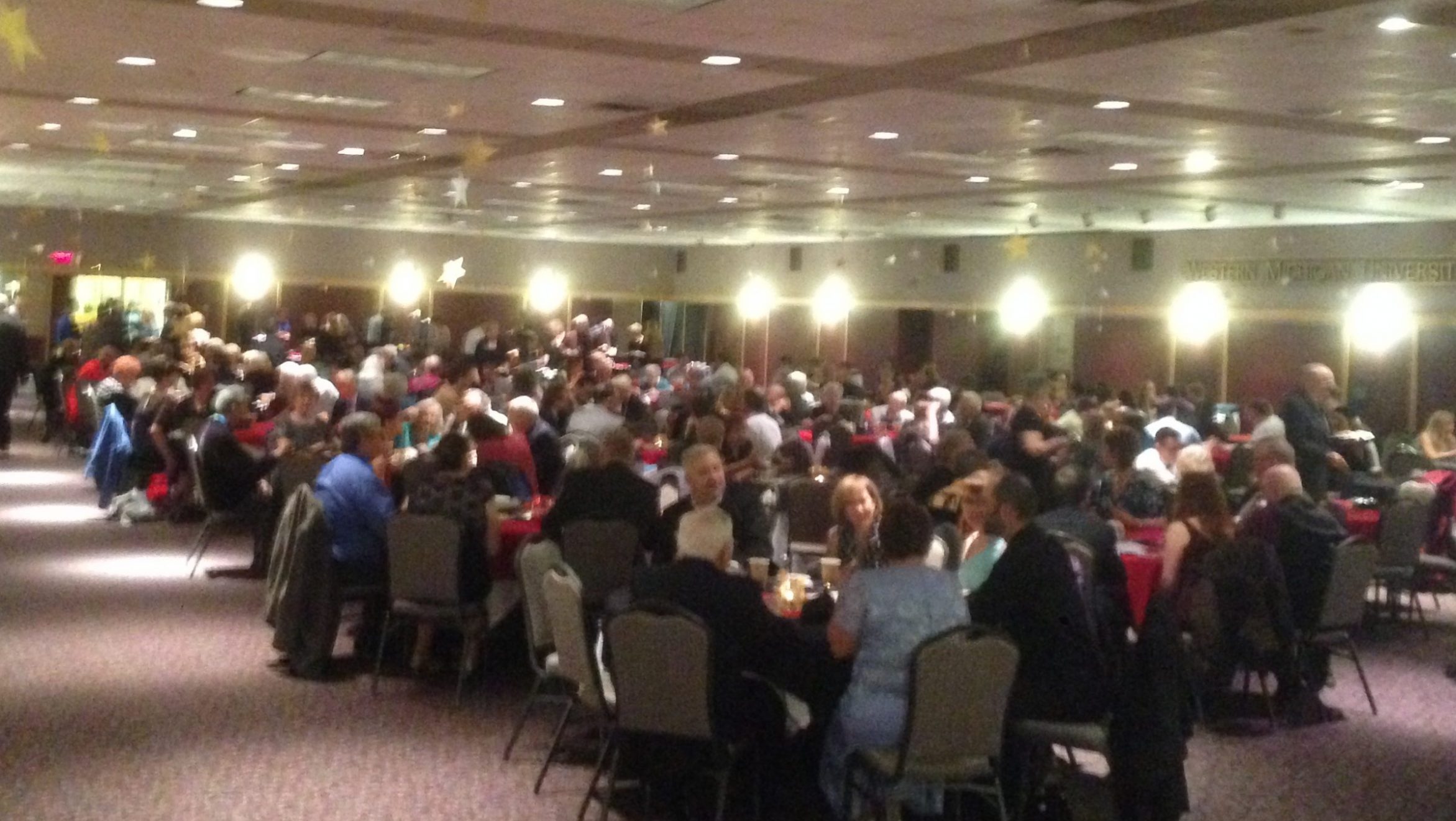 The Senior Prom began in 1988 as a way for older WMU alumni and area residents to share an evening of fun and reminisce with current students. The Senior Prom is organized by staff members in the Ernest Burnham-Smith Burnham and Henry residence halls with the help of volunteers. Financial assistance is provided by several WMU organizations, including the Residence Housing Association, various residence hall councils and the Residence Life office.

The Otsego Jazz Ensemble is thrilled to be playing at the prom again this year.

The theme this year is  “30th Anniversary: Thirty, flirty, and thriving” with decorations mostly being pearls and lilies with black and gold as the colors.

Check back for more details soon. 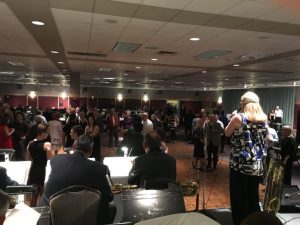 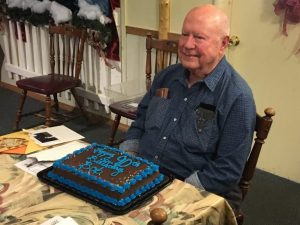